Postproducing “The Place Where You Live”

It’s been a while since I’ve posted an update about my upcoming science fiction short, “The Place Where You Live.” In the months since the initial two-and-a-half day shoot, I’ve edited the whole thing together, and after several passes of polish, the final runtime comes to 12 minutes, excluding end credits.

The edit so far

That’s a bit longer then the now quaintly optimistic 8 minutes I was estimating up front, (the shooting draft of the script itself is 9 pages). Having shown it to a few early audience members, it’s a tight 12 minutes that moves along briskly, and I’m pleased. The cut is always the last draft of the screenplay, and being the writer and the editor really hammers that home.

Once I finished the first cut, composer John Rake started putting together the music cues, seven of them in all, so I had something to play off of the visuals as I started my fine cutting. It was a great process bouncing cuts and cues back and forth as we zeroed in on the final timings, and I’m really happy with the score, which has a retro nod to some of the synth-oriented scores I’ve loved from the ’70s and ’80s.

Once I had enough of the edit done to know where I needed to add some narrative space, and how I wanted to handle the scene transitions, I did one last half-day shoot with DP Eli Ljung and AC Erica Wollmering to get some second-unit style driving, hallway walking, and videophone conversation shots accomplished, which allowed me to finish the cut once and for all. 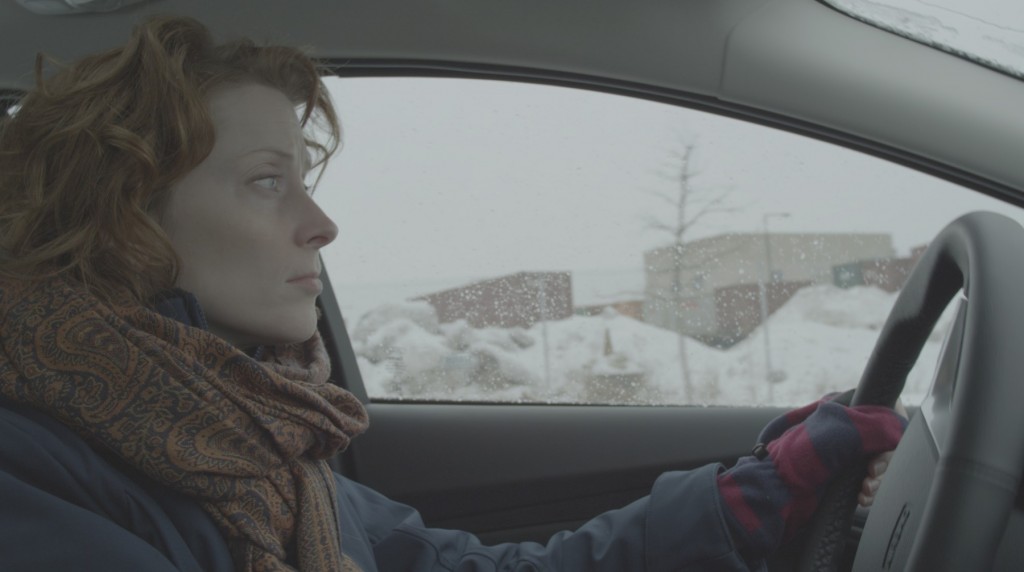 As I cut in Smoke 2013, I took advantage of the integrated compositing to assemble rough comps to identify the timings of each of the VFX plates, and to help test viewers out.

For example, there are a number of shots that visualize heads-up-display technology for all of the computer screens. While I didn’t want to take the time to comp in a whole UI, I did have the reverse half of a videophone conversation that I needed to edit together, which I was able to easily rough in with a picture-in-picture effect using Smoke’s 3D transform environment, using Smoke’s Axis timeline effect to quickly motion track the window to the background for a true “floating window” effect. This is a level of VFX detail I’m not used to having in an NLE, and made it a lot easier for my test audiences to pay attention to the story, and not the effects-in-progress.

Of course, using my primitive compositing as a reference, I was then able, using Dropbox and with compositing supervisor Marc-André Ferguson’s help, to organize and hand off all of the plates to the team of artists and compositors who are remotely creating the final VFX, including the actual HUD graphics (graphics design by Brian Olson at Splice Here, compositing by Aaron Vasquez). 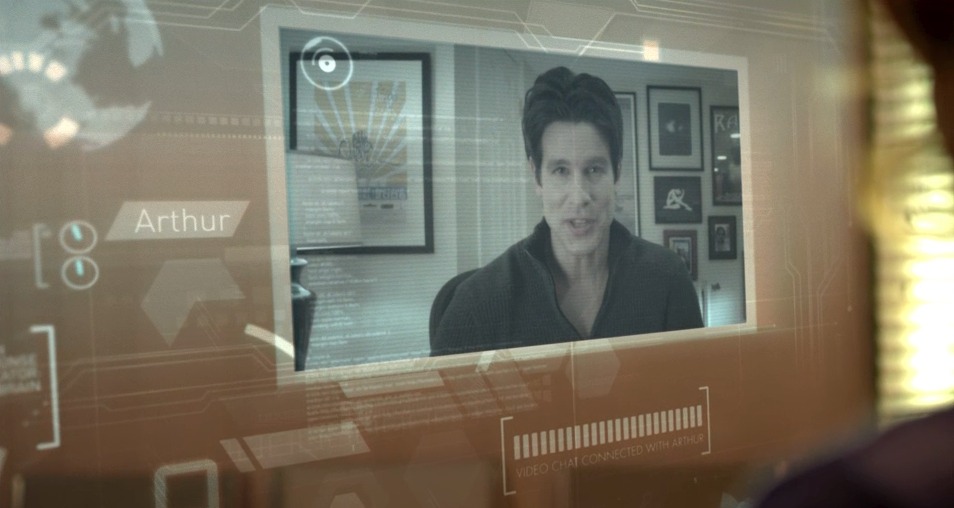 Another compositing artist, seasoned Smoke veteran Brian Mulligan, has been creating the “doorway between dimensions” effect used throughout the piece, as well as rocking some of the more challenging digital duplicate shots of main character Nina and her doppleganger from another reality. 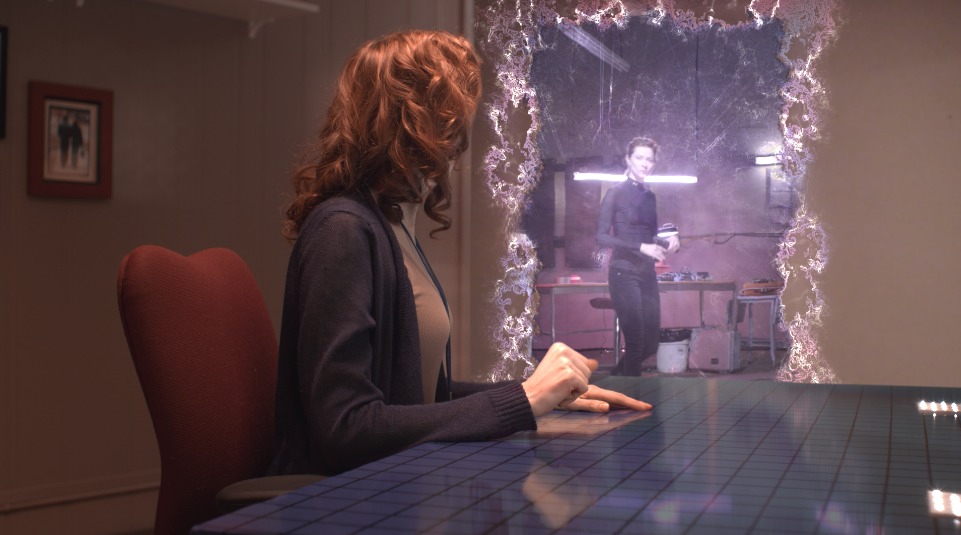 The dimensional doorway, in progress, compositing by Brian Mulligan

Meanwhile, 3D artist BJ West has been creating the set extension for the lab using 3D Studio Max, building what he’s been referring to as “La Machine.” First, illustrator Ryan Beckwith’s finalized his concept art for the machine. 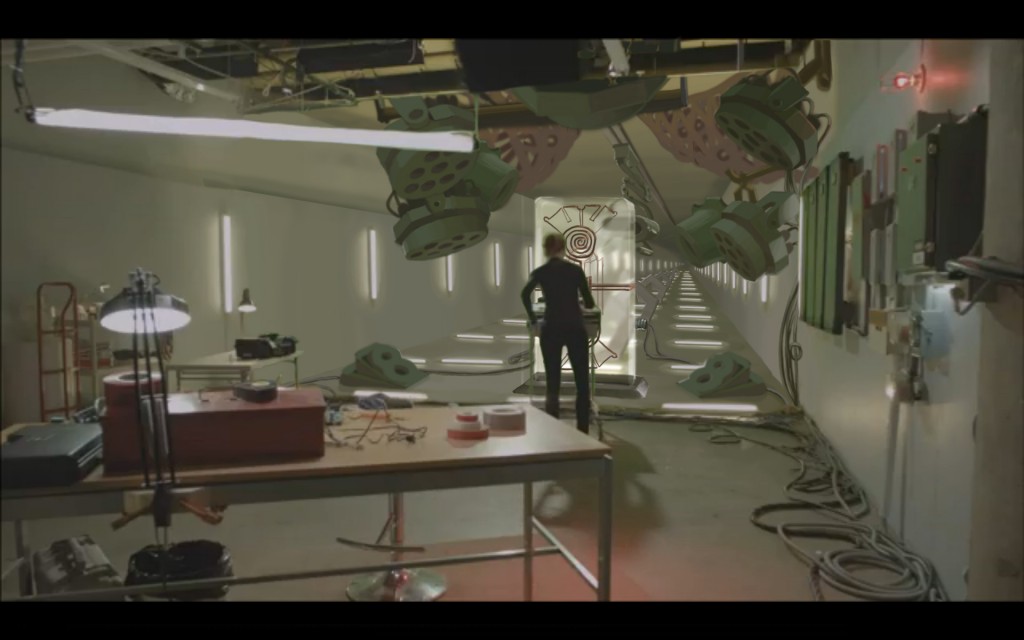 With that finished, BJ has been elaborating on the initial design, making modifications as I’ve been coming up with changes based on the needs of editorial. 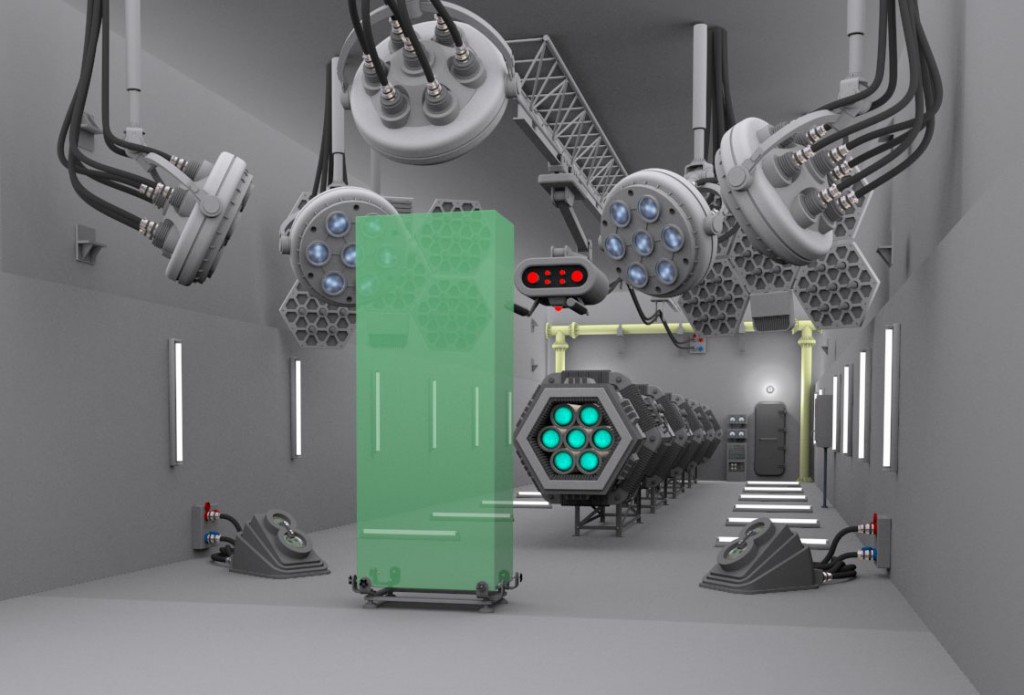 BJ’s challenge has been to fit the geometry of everything so that it matches the space of production designer Kaylynn Raschke’s lab set. My goal is for a seamless digital set extension, and we’ll be sweating the details. 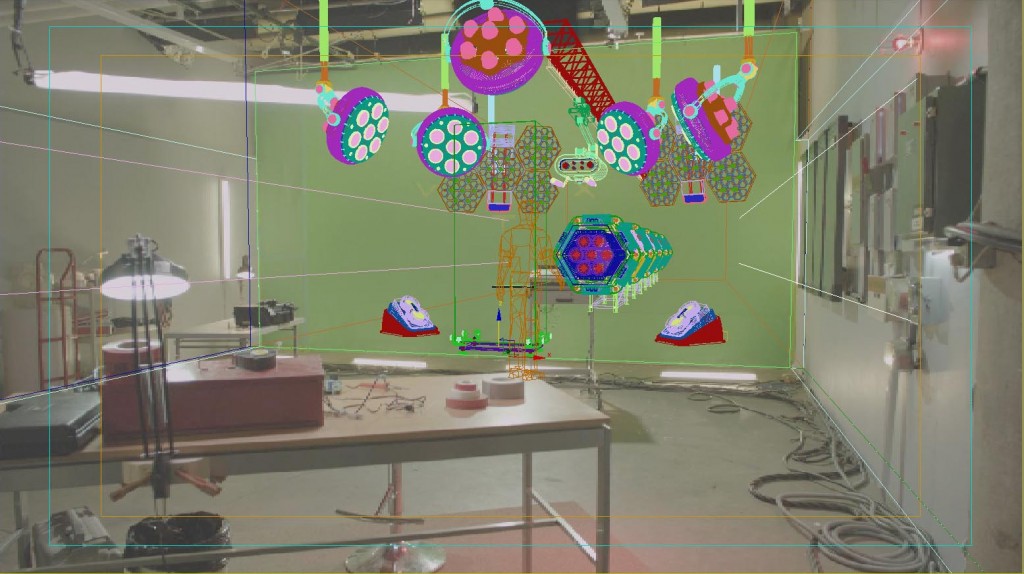 At the moment, all of these VFX shots (57 of ’em) are still in process, but I’m aiming to get one segment in particular finished to the point where I can preview it during interviews at NAB. The rest of it will be completed by the end of April (I’ve just handed off the audio tracks to sound editor Kelly Pieklo at Splice Here, so we’re on our way).

So that’s where the project is now. It’s far and away the most technically challenging piece I’ve ever directed, but all of the elements are coming together beautifully, and I can’t wait to share the final product once it’s done.

“The Place Where You Live” Teaser

Sounds like a fun project. Thanks for keeping us up to date.

I really enjoyed your 11 hour class on Davinci, will you be doing another class and using this short as material for that class?

Actually, once I get out of the woods of posproduction on this short, I’m going to be writing a beginner’s book on editing and compositing in Smoke using scenes from this movie. Don’t forget, I used to work as an editor and write about editing for the Final Cut Pro manual, so this is a nice break from the last four books in a row I’ve written about grading. But don’t worry, I’ve got another grading book waiting in the wings once I get through my current roster of projects.

I’m sure everyone is different, but for me I enjoy watching you work from a screen capture video rather than reading a book. I learned a ton from watching you on the Davinci course. I would like more of that.

My tutorials on YouTube get watched over 400k times a month, I am not an expert on this topic but I can tell you that many of my subscribers like watching video tutorials and don’t like to read written text tutorials. My latest course I am releasing this week is over 4 hours long (nothing like your 11 hour course), I am curious why you don’t sell these video courses yourself instead of using a third party to sell it for you? I think you have a big following where you could market the course yourself.

Again I am new to this so I could be totally wrong, as I know you have had great success writing books before.

If I see you at NAB I will stop and say hi.

The truth is that I find I can be more succinct, organized, and assemble my thoughts more deeply when writing text, which is why my Color Correction Handbook covers the range and breadth of topics that it does, in as careful a manner. It takes a few iterations of research and writing for me to put my thoughts together when I’m tackling the more inter-disciplinary aspects of postproduction.

I find video training, for me, a good way to work through application-specific workflows, and for application training it’s great, but I find it less effective for creating the more in-depth content that I like to address.

As for why I work with Steve Martin at Ripple, I like the way they edit and polish my material. I have so many projects on my plate at any one time that the notion of editing, hosting, and dealing with all the business of training fills me with existential dread, and there’s no way I would do as good a job delivering final training movies as the folks at Ripple do. I’m very happy with how they’ve handled my work, and look forward to doing more titles with them, as my time permits.

In fact, they’re in the middle of editing a “Creative Looks in DaVinci Resolve” tutorial I recorded, and I’ve some other titles in mind.

Your answer was pretty much what I thought.

I know what you mean about all the editing, hosting, coding, shopping carts, etc. If that stuff slows you down or does not make you happy, I am glad there’s someone like Steve Martin to do it for you so we can watch more of your stuff!