Anyone who knows me knows I’ve got two main opinions about gear. First, don’t buy gear, rent it. Today’s awesome stuff turns into tomorrow’s laughably obsolete curiosities. Second, I could care less about cameras. I’m a director, not a DP, and as long as the DP likes whatever camera we can afford to use, and the resulting image data is gradable, then I’m happy.

So it’s with some reluctance that I admit I’ve started buying camera accessories to have in reserve for the increasing number of small projects I seem to be directing. Starting with my next directorial excursion, a scene rather then a fully realized movie, designed to create some nicer material to use for my next book, video training, and presentation projects, and in the process work with another great local Minneapolis crew to create something very different from my previous two movies for my director’s reel, which by god I’ll actually put together one of these days.

Today was all about prepping the aforementioned camera equipment. DP Michael Handley, AC Brian Suerth (pictured later), and I poured over the three Blackmagic Design cameras we’ll be using, a brand new Ursa for most of the coverage, a Production 4K that we’ll be using with a Ronin gimbal stabilizer to fly around one of the day’s two locations, and a Pocket Cinema Camera for POV shots in tight spaces. I’ve been wondering if I’d find utility in the three different form factors of cameras that Blackmagic now offers, and I now appreciate that it’s really  nice to have different sized camera bodies for different tasks, each of which can be prepped simultaneously with different rigs. A far cry from my days of having a single CP 16 film camera to work with. 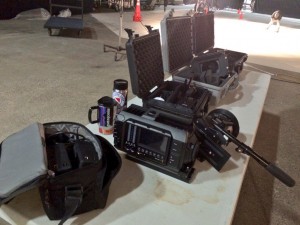 The Ursa itself is a beefy camera, but resultantly quick to set up thanks to an attached battery mount plate (extra), built-in rails mounts, and a built-in handle; I really, really liked the speed of setup. The editor in me wants as many angles of coverage as I can shoot in a day, and I hate feeling like I’m waiting for a camera to be rebuilt from setup to setup. 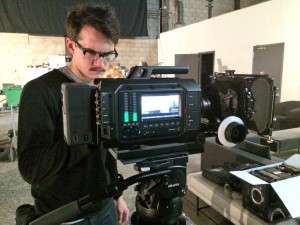 Since I usually prefer to have the camera on support rather then handheld, given the type of coverage I tend to go after, the Ursa’s weight (16.5 lbs without lens/etcetera) doesn’t really bother me—we’ll be using a jib, dolly, and slider to move things around when necessary. Of course, that’s easy for the director to say, I don’t have to move the camera from setup to setup, but nobody on the camera crew has had any complaints so far. 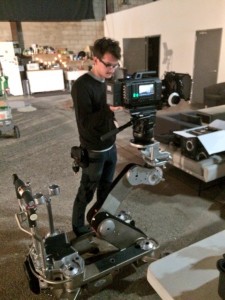 Incidentally, the 10″ swing-out screen is pretty awesome. As are the two other touch-screens on either side of the body that switch between UI and monitoring for the assistant. Brian mentioned he still may use his own display for working the focus, but more because it’s the display he’s used to, which makes sense to me.

We toured the menu system, and were pleased to find it pretty straightforward. So, at least so far as setup goes, the Ursa seems to be a no-drama camera. And, pointing the camera at random things at Tasty Lighting’s Acme stage, the EF mount Rokinon cinema lenses I’m using coupled with the Ursa’s Super35 sensor made the kitchen area and random lighting instruments positioned here and there look delightfully dramatic framed in 2.35.

So far so good. I’m looking forward to seeing how it performs on location.

The Prodigal Son With the Prostitutes