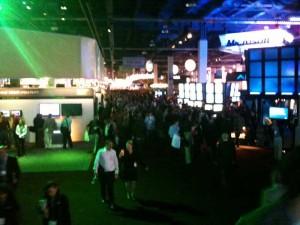 The south hall NAB show floor (where all the postproduction was) on Wednesday was packed.

Upon my return to New York and my first full night’s sleep in a week, I thought it would be good to follow up upon my last post and share some experiences from the rest of the show before they faded from memory. Overall, I had a great time visiting the different vendors of color correction hardware and software and comparing what they can do. Interestingly, the south hall (where most of the postproduction hardware/software vendors were located) was packed, much moreso then what I saw of the north and center halls, where all the production and distribution gear was located. With the abundance of tools now available to enable talented people to do increasingly incredible things, it’s a good time to be involved with post.

I got a fuller demo of the workflow involved with moving Avid and FCP projects to and from Baselight. Baselight has a clean, if packed, user interface, and as far as I can tell has pretty much every software tool ever devised for making color correction adjustments. It’s accompanied by an equally impressive price tag, but then if your clients really need that kind of horsepower, you should be able to afford it. I saw both AAF and XML project files round-trip without any drama, although I feel obligated to point out that although there’s support for multi-track timelines and speed effects, support for other effects (motion effects, still frames, generators, etc) is predictably absent, so anyone who has complained about the amount of project preparation required in moving a project from FCP to Apple Color isn’t going to find this any better.

However, it’s still better then a one-track EDL-only workflow for projects requiring multi-track media management. ProRes compatibility is a big deal, although the means for supporting ProRes on a Linux application is interesting; an Xserve works as an intermediary, reading the ProRes data and converting it to a data stream that’s sent to the Linux computer that’s actually running Baselight. It works well, and allows real-time work at full frame rates (though on the base system I was watching, the final corrections still had to be rendered before being output). Still, it seems like a lot to go through. Sure would be nice if Apple provided ProRes support for Linux (since there are now a ton of post platforms on that OS). Oh yeah, and Baselight has a great control surface.

One other thing of interest–Sony introduced a new version of HDCAM SR, that among other things is capable of storing CDL color correction metadata on tape. Baselight can read this data, and extract the on-camera color adjustments for each piece of media in the timeline to use as the starting point of the grade. Nice. I look forward to seeing how many other vendors use HDCAM SR CDL data for various workflows. 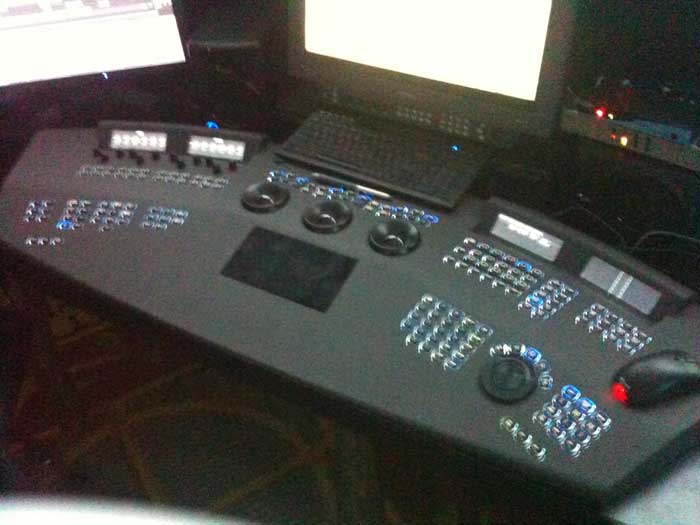 The control surface for Baselight will make your suite look like the bridge of the Enterprise.

In the spirit of fairness, I also had brief looks at Digital Vision’s Film Master (interesting compositing tools and AAF support) and Assimilate Scratch (new compositing operations that look to make multi-track FCP XML workflows even easier), and both are impressive platforms for their intended markets. Unfortunately I don’t have much more to say as I didn’t get full demos, but I hope to have closer looks at both systems in action in the coming months.

Incidentally, I also had another look at Davinci’s software Resolve product for Mac OS X. As this is a system I could actually afford to add to my suite in the near term, I was curious about the Mac Pro hardware configuration they were running on the showroom floor. I was told that of the two NVidia cards installed, the one doing the heavy lifting was the GTX 285 (the other being the base GT 120 card that’s handling the UI). This is definitely an affordable option, though it’ll be a change for all the Apple Color users (myself included) who’ve set up their systems based on the ATI graphics cards that have long been recommended.

I also got a nice look at Cintel’s diTTo film scanner. With some fancy-pants technology for dust and scratch elimination, this is actually a “portable” solution (it even has integrated storage so it’s completely self-contained) for situations where a film scanner needs to be taken to a film archival facility to scan prints that can’t be taken off premises.

It does 2K and 4K film scanning. Cintel seems to be positioning it as a jack-of-all-trades film scanner for preservation, effects work, and digital intermediate work. It’s not the fastest scanner around at 2 frames per second, but it’s relatively affordable (I believe it was around $300K–I said relatively) and what really impressed me was the lack of necessary infrastructure. Put it on a level surface in a clean and dust free environment, plug it in, and spool up your film. There are no special cooling, ventilation, or other installation or connection requirements to deal with. I had somehow expected film scanning equipment to be more hassle. Neat. 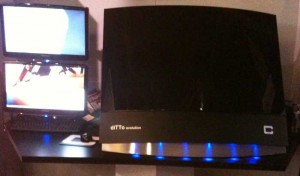 A "desktop" film scanner from Cinetal. Make sure it's a strong desktop.

I also took a look at Dolby Labs insanely spec’ed new PRM-4200 reference monitor. It’s an LCD-based panel that uses red/green/blue LED backlighting (similar to the Dreamcolor and Flanders Scientific displays) to deepen blacks and extend the gamut. It’s surprisingly deep (it’s a beast of a monitor), and rather large to look at too at 42″. Aside from full Rec. 709 color accuracy (for which this monitor is way, way overkill if you ask me) it has 100 percent support of the DCI/P3 colorspace required for digital cinema. For reference, the Dreamcolor and Flanders Scientific displays both say they support in the neighborhood of 97% of the P3 primaries (which really isn’t bad), so getting something other then a 2K projector that can do 100% of P3 means you can build a smaller cinema grading suite that still shows all the color of digital cinema.

I watched the darkened room demo, and it looks absolutely gorgeous. If it survives closer scrutiny from industry display experts, then it’ll probably be a big deal for large post houses with deep pockets.However, for the rest of us boutique sized grading facilities that primarily work within Rec. 709, this monitor is probably not a serious consideration considering its high price tag (I’ve read other blogs put the TBD price tag anywhere between $30 and $50K). I’ll be curious to see what the final pricing is, and who starts to deploy this model first.

So that was everything that made a big impression on me. I looked at a lot of SAN and direct-attached storage solutions, and while I saw lots of great high-performance drive systems, I’m disappointed that prices for Fibre-based systems stubbornly remain high. Otherwise, I find it impressive that support for ProRes is growing throughout the industry (the ability to record to ProRes 4444 in the new ARRI Alexa camera is simply stunning), as is FCP XML round-trip support, making it easier and easier to handle complicated edits from FCP in other grading solutions. It’s all good news for the midrange post facility trying to add services and improve capabilities in a tough economy.

“The Girl With the Dragon Tattoo” Is Not a Techno-Thriller