About Those New Mac Pros… 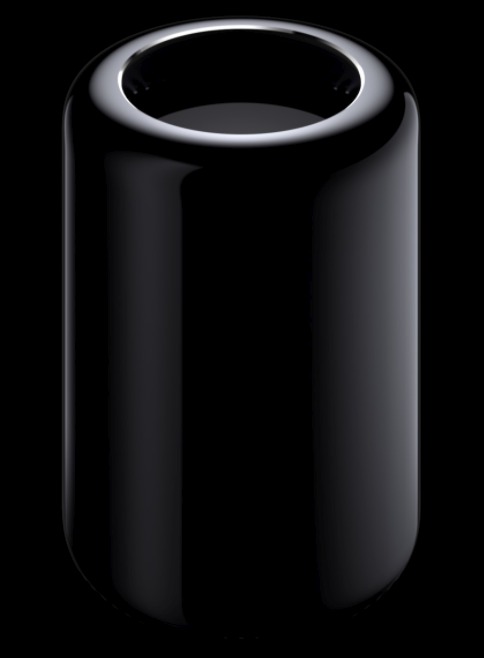 To be honest, the only reason I’m writing this is because I feel a tad guilty about my first post-Mac Pro announcement tweet. The one where I was really upset about the inclusion of ATI GPUs instead of Nvidia. Understand, for the last three years I’ve been fully immersed in applications for which the messaging has consistently been “we’re heavily optimized for Nvidia and CUDA, and the current version of OpenCL on OS X sucks.”

What Apple did a terrible job of making clear in their initial presentation was that a new version of OpenCL will apparently make it far easier for software developers to achieve stellar performance on this new hardware. And I’m not drinking cool-aid; outside of the various announcements that Blackmagic and Adobe have made, I’ve had several email exchanges with folks I trust who are in a position to know, who are sadly hidden behind multiple layers of NDAs. The responses I’ve gotten have been incredibly optimistic.

So that makes me feel better.

I don’t care what the thing looks like. They can put the internals in a shoebox if the machine runs quickly, quietly, and reliably.

I don’t even care that much about the expandability story, given my own personal use case. Frankly, its two high-end GPUs will be far better then what I’ve got now in either of my current two Mac Pros, and if the integrated architecture sacrificed slots in order to move bits around faster, that’s fine with me. I’ve already got a spaghetti USB hub, USB audio interface, and external RAID connected to my current Mac Pro, so all the new one would add would be a Thunderbolt video box, which I frankly prefer to an internal card as I can move it around and use it with multiple computers, desktop and portable, and an external box for my Red Rocket, which again would make it more portable which is kind of interesting when you think about it.

The only thing I lose is the illusion that I, personally, will someday buy a PCIe expander and fill it up with four highest end GPU cards in order to have a mega-processing behemoth. For those who actually would do such a thing, this is a true loss, but it’s a dream I can’t afford. Two GPUs will do me fine if the architecture is right.

So I’m happy to wait and see. Time will tell what its true performance will be once it ships.

There’s only one thing; if Apple’s going to solder everything together in a non-upgradable form factor, they better update that fucking product every year to keep it current. And it’d help if the price is low enough so that an annual or two-year upgrade cycle is an attractive prospect for power users (I used to upgrade my Mac Pros every other year, back when there was something worth upgrading to). I’m tired of waiting in silence for next generation hardware to help me do my work, and it would be nice to feel that Apple has as much regard for users of this new form factor four years from now as they do for their current laptop and iOS customers.

What I mean is, affordable relative to a z820. I’m not expecting Mac Mini pricing.

I’m a fan for sure. But I agree, affordable and Mac Pro don’t mix. I own a Mac Pro and a custom built PC (dual 8 core E5 Xeons, thats 32 cores, 3 x GTX 680 4GBs, Black Magic Card, etc..). Boxx, Supermicro, & ProMax all make an “affordable” solution if you didnt want an HP. I went the custom route because it was cheaper and more expandable and I wasn’t willing to wait for a new Mac Pro that would be less so. Sad to see my hunch was correct.

Alexis your exactly right about the need to keep this unit upgraded.
Apple is not short of money, so how pro-active they are in keeping this current , can only be interpreted as how committed they are to the pro-space nothing more.

Are they recommitting to the pro space now that Steve is gone?
Are they buying time with pro’s while they try and decide how committed
they really are?
They can “afford” do to anything…. so time will tell.

Like you, who cares what it looks like, only how it performs. We all want computers so fast that they are waiting for us to decide instead of us waiting for them to build or render.

Fact is that outside of pro users, desktop computing is pretty much dead already, its just not where they money is anymore.

Guess we’ll have to wait and see eh.

This line is the most important I think: There’s only one thing; “if Apple’s going to solder everything together in a non-upgradable form factor, they better update that fucking product every year to keep it current.”

That’s the big “Will they?” Like you, I’m tired of waiting and playing “what will Apple do” game. This machine is very impressive and I might consider one or two for some new series we’re doing to send the machine(s) in the field for DIT work. Can fit in a backback, add a lightweight monitor and off you go.

Personally I see hardware like the nVidia Visual Computing Device being a very interesting move towards the future of raw power where needed. I’m chomping at the bit to test that out whereby I can literally continue to use old model Mac Pros, older / newer iMacs and PCs for the front end but all the backend work is handled by 8 to 16GPUs running in the box. When it releases it’ll all operate off the hardware only but I’m hopeful that nVidia will be able to adjust that so we can literally assign a GPU or two or three as needed to particular computers. I would gladly install a box like this that can service all the systems in my shop vs. an innovative machine from Apple that I’m not sure when / if it will be updated in the future.

[…] Alexis Van Hurkman – About those Mac Pros: The only thing I lose is the illusion that I, personally, will someday buy a PCIe expander and fill it up with four highest end GPU cards in order to have a mega-processing behemoth. For those who actually would do such a thing, this is a true loss, but it’s a dream I can’t afford. Two GPUs will do me fine if the architecture is right. […]