The Letters H and D Are Now Meaningless

I was walking down the street a few weeks ago, and did a double-take as I spotted the familiar “HD” acronym on the door to a downtown business. Can you guess what that business is? 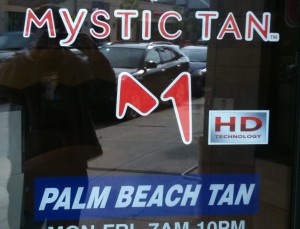 Yes. Apparently you can get a high definition tan. Or perhaps a “highest defenestration” tan, wherein your newly bronzed body is thrown from a window of the top floor of the building.

Jocularity aside, this got me thinking about a topic I’ve seen others address, namely that the idea of High Definition, like a million dollars, isn’t what it used to be. More to the point, HD as a selling point for video equipment is probably as meaningless as “broadcast quality” once was, whatever that meant.

Now, if you’re a stickler, HD as defined by frame size, square pixel shape, and frame rate (granted, there are a bunch of acceptable frame rates) is a perfectly valid definition. And yet frame size, or more specifically the number of pixels that are recorded, is not in any way indicative of the quality of the overall picture, or how well it’ll hold up in post.

YouTube can now stream 1080p “HD” video. Hell, it can apparently stream 4K. Does this make it a mastering format? Or even acceptable as a source format? Please god tell me your answer was no (I know, I know, you use what the client gives you).

At this point, the wide variety of camcorders, cheap-o party digital recorders, point and shoot and DSLR cameras, and even our cell phones can record 720p or 1080p video. High Definition video. And yet, what does this really mean in terms of quality? Most of these devices record a highly compressed video stream, now usually a variation of the reasonably competent H.264 codec. On more inexpensive devices, the chroma subsampling is 4:2:0, meaning that roughly 3/4 of the color data is irretrievably thrown away when the image is recorded.

Both the compression and the chroma subsampling are significant compromises, and while you won’t necessarily notice anything untoward when playing these video clips as is, it’ll become apparent during postproduction, as compression artifacts are exposed (macroblocking and junk in fast-moving scenes) and your colorist is stuck fighting a losing battle for latitude vs. noise while trying to make various adjustments (a result of the low chroma subsampling). For all the pixels that are available in these highly compressed formats, the quality is not nearly so high as that of other HD formats that are more lightly compressed and have better chroma subsampling ratios (4:2:2 or 4:4:4), such as HDCam SR or AVC-Intra. And yet all of these formats are unquestionably “HD.” Then there’s the Alexa, and while it records a 1920 x 1080 sized image, I suspect the engineers at Arri would beat me senseless if I referred to this digital cinema camera as recording HD.

Now, lest I fall into a common colorist whinge-fest about shitty formats, I will say that in my own practice, I grade what I’m given. I’d love to be consulted prior to someone’s shoot so that I could recommend that everyone shoot either film, or the RED EPIC, or an Arri Alexa.

However, not many folks ask my opinion, and I grade a lot of low and no budget projects, so it’s really not my place to gripe about their source format. And fortunately the newer higher data rate profiles of various cameras H.264 formats are not impossible to grade assuming the initial exposure was fairly close to begin with. (Ironically, I’ve always felt that highly compressed formats require much more skill on the part of the DP then do higher quality formats that have more latitude.)

Now, this is the part where you ask what my point is with all of this.

I suppose I have several. It’s almost impossible to buy a new standard definition television any more. Furthermore, recording, editing, and playing of HD media which once required a hugely expensive series of equipment upgrades, can now be done with cell phones, iMovie, and online video hosting services. “HD” is no longer that descriptive, it simply differentiates from older, increasingly quaint Standard Definition formats.

So, if you’re shooting video and you’re excited about the fact that you’re shooing “HD,” just take one more look at the specifications of the recording device you’re using and make sure that the digital media that’s being generated is a format you can live with in post. If you’re calling up a post house and they ask “what was the shooting format,” please be specific about the camera and the type of media that was recorded, because it matters, and “HD” isn’t saying much. And if you’re mulling over what format to shoot, ask your DP for recommendations before setting your mind on an inexpensive format just because it’s High Definition. Because otherwise you risk getting tanned in post.

You Can, In Fact, Get My Book Cheaper Then This

Do Work You Can Be Proud Of

There’s No Best Software, Only What You’re Capable...

Brilliant as always! Yes I grade what is given but I do some educating while in the Color suite with the director so they make better choices for the next project. Sometimes it is all you can do. Trying to salvage what they have and better prepare them for making a better choice next time. That way it doesn’t make a tan into a burn!