Home What’s in a Name?

What’s in a Name? 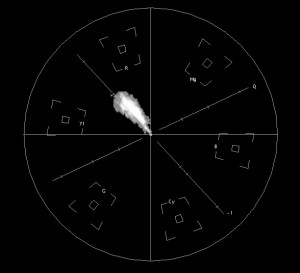 The following is a reply I posted originally on Creative Cow’s DaVinci forum regarding the little line in the Vectorscope that serves either as an in-phase indicator for signal alignment, or an approximate guideline for the angle at which human skin tone may fall in a neutrally graded shot.

It was brought up that, since the original engineering purpose of this indicator was for image alignment, and had nothing in fact to do with skin tones, and since in-phase and quadrature indicators have nothing to do with high definition signals, that it is perhaps inappropriate to carry this indicator forward into newer implementations of video scopes in the digital world. In particular, Mike Most (for whom I have the highest respect) wrote “an assumption that the I axis is there specifically for flesh tones – in particular Caucasian flesh tones – is incorrect, based on equally incorrect information printed in an Apple document.” You can see the full discussion here. The interesting parts come towards the end.

Mike Most makes some excellent points about the origins of this indicator, and about over-reliance on it being a crutch for inexperienced colorists. However, “incorrect” is a strong word, and since I wrote the Apple documentation under discussion, I thought it might be interesting to shine a light on both some design decisions that were made in FCP and Apple Color, and how terminology gets coined and disseminated.

When FCP 3.0 was in development, the then-new color correction tools and video scopes being added were brand new to the majority of desktop video editors, and the engineering team was working to try and make this unfamiliar paradigm of lift/gamma/gain style controls and the accompanying scopes comprehensible to a new audience. It was a deliberate design decision to include one half of the in-phase axis line all by itself as an indicator of the general hue of skin tone, since to my knowledge the not-so-coincidental dual use of that indicator had been a documented rule of thumb of videoscope use for many years prior. This coincident use was not something the Final Cut Pro engineering team made up.

In an effort to make the purpose of this line more transparent, I (as the writer of the manual) and some others decided to call this the “Flesh tone line,” a decision I now somewhat regret as it muddies the history of this indicator; and yet as this was the only one of the in-phase and quadrature lines that the team elected to draw upon the FCP vectorscope, I stand by the decision as it made immediate sense to the new user, and the purpose of this indicator as intended had nothing to do with signal alignment, and everything to do with providing a flesh tone signpost to people new to reading scopes.

Regarding the “I-bar” terminology, this was the term I decided upon when writing the Apple Color documentation, as I expected a more experienced audience would appreciate an acknowledgment of the original purpose of this line. Also, the Color team implemented all four in-phase and quadrature indicators, so it seemed appropriate, “I” for in-phase, bar because it’s a line.

I did not make this term up; after scouring different terminology from various sources, I found and settled on “I-bar” as the shortest term for purposes of documentation (try typing “i-axis indication line” ten times fast). Unfortunately, I can’t cite my source anymore as this was years ago, but nobody in a position to offer a technical review of that manual, nor any colorist who’s done either technical or casual reviews of books I’ve written since, has ever informed me that “I-bar” is wrong, and I’ve been using it consistently ever since. If, in fact, it turns out that my deadline had made me delusional and “I-bar” was the fevered ravings of a caffiene-addled technical writer, then I still stand by it since it’s less to type and is a fine abbreviation, but I cannot in truth take the credit.

I’ve discussed the history of the I and Q axes with many folks over the years, and while it’s true that the engineering reasons behind these indicators have nothing strictly to do with flesh tones, my personal feeling is that the coincidental utility of the in-phase indicator’s position has, over time, come to outweigh its original purpose, and in fact I would consider the “I-bar” we’re currently referring to as a new thing that coopted the old, sort of like Easter coopting an earlier collection of various pagan celebrations.

To clarify, I would never and have never suggested that this line is a strict guideline for human hue. In my “color correction handbook” I wrote and illustrated more pages then my editor may have wished about the subtle variations of human skin tone, color interactions between a subject and the illuminant of a scene, and how the in-phase indicator under discussion is merely a general signpost. Like speed limits, nobody follows them exactly, but they let you know you’re around what you ought to be doing.

Lastly, I’ve used scopes that have an I-bar, and I have a very expensive scope that doesn’t (in HD mode, as has been pointed out), and while I still think it’s nice to have, its absence has never hampered me from delivering attractive skin tones to my commercial clients. However, given the choice, I’d like to see this indicator as an option for folks who like it; in fact, I’d love to see someone develop the option for multiple programmable vectorscope indicators at user-selectable angles, but then I’m a bit nutty for options. The hue that, in NTSC, is represented by the I-bar can certainly be mathematically translated into the same hue in HD color space, and I see no reason why that wouldn’t be useful or appropriate, if it’s documented clearly that this is no longer in-phase, but in fact an analogous flesh tone guidepost that can be turned on or off.

I would suggest that video scopes at this point are simply software, and it should be no sin for developers to add new features of utility to users and to label them clearly. I’m fond of pointing out that the days of fixed ground glass graticules are over, and it would be nice to see developers find more things to do with scopes for both basic and advanced users then to simply replicate functionality from analog, trace-drawn CRT technology.

The Tangent Element, a One Month Review

I like this line because when a client is annoying I just show him the line as “the only true reference”, it usually does the trick. 😛

[…] What’s In A Name? – A blog post by author Alexis Van Hurkman on the whole I-Line thing and his decision to call it the “flesh tone line” in The Color Correction Handbook – a decision that has proven controversial. (Yes, the field of color grading has controversies. Yay!) […]