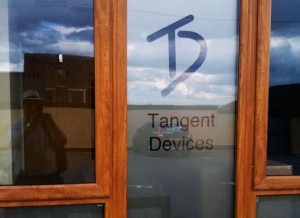 While I was in the UK last month, principals Andy Knox and Chris Rose of Tangent Devices invited me up to their offices in picturesque Toddington (about an hour outside of London) to check out what they’ve been up to. Touring their offices, with prototypes and stacks of CP-100s (the last 3 they have in stock), CP-200s, Waves, and various parts, it was interesting to see the evolution of their designs from product to product.

They’d already contacted me almost a year prior to share some preliminary designs and mockups of a new control surface they’d been planning, and had shown me their first prototype that they were slyly sharing with select folks at NAB, but this was an opportunity to look behind the curtain and see what goes into the design of a control surface, from the inside out.

Tangent has named their new control surface the “Element,” and it presents some new thinking about creating a smaller, lighter, modular set of grading controls that, despite the size, feels robust and professional. Alas, I have no photos to share at this time, as they’re holding back for the big unveiling at IBC, but these panels not only feel great to the touch, they look fantastic.

They’ve not yet determined the final pricing, but I’m told they’ll sell for between $3,000 and $3,500. That will get you a base set of four panels:

Each panel has a vertically angled OLED alphanumeric display on top that identifies each control, for dynamic labeling, along with shift buttons for stepping through different “menus” of parameters, depending on how they’re used by the software they’re controlling.

The panels themselves are thin, light, and strong, with durable metal construction. They’re small (there’s no wrist rest, reducing their footprint), so they’ll sit comfortably next to a keyboard and mouse or magic trackpad, and they’ve been designed to either sit loosely on your desk in whatever arrangement you prefer, or to “click together” magnetically to form a rectangular block of controls.

I’ve two uncles who are machinists, and my dad used to be a navel aircraft mechanic, so I’ve grown up around mechanical design enough to appreciate the details that go into something like this. Much thought has gone into the Element’s various details.

For example, the mechanisms of the push-for-detente rotary encoders (knobs) have been newly designed from scratch, and feel solid and smooth. These are NOT the Wave knobs, they’re completely different, and they actually feel nicer then the CP-200 encoders. A gel packed inside of each knob creates resistance that provides a smooth, expensive-feeling twist, and in fact they’re using the same gel that’s used by high-end audiophile gear (think of an expensive amplifier’s volume control) and professional telescope focus knobs. In fact, there’s a range of gels available, each enabling a different amount of drag, and Tangent tested a variety to determine the best “feel” for continuous use.

Furthermore, the buttons resting underneath each knob (for push to reset) were carefully chosen. Here again, they tested a grid of buttons from their supplier, each requiring different newtons of force, to find the best feel for the “click.” Not too light (or you’d accidentally push to reset all the time), but not too hard. I got to try the different buttons out myself, and the one I chose in my blind test was exactly one level away from the one they’re actually using (their choice was a tiny bit stiffer, to discourage accidental resets).

The push-buttons used by the Element panels will be familiar to anyone using Tangent gear, they’re the same ones that are used by the CP-100 and CP-200 panels (and the Wave, for that matter). I was told that most CP-200 users have reported they really like the buttons, and the failure rate has been incredibly small, so they’re sticking with a winning formula there.

Finally, the trackball/ring control encoder mechanisms are a completely new design, and are smoother and more precise then any of their previous surfaces. This is due both to improvements in optical sensors, and the evolution of Tangent’s mechanical engineering (in fact, a new rapid-prototyped encoder arrived while we were talking, and I got to see their latest tweak to the ring mechanism). Fans of ring-around-the-ball contrast controls should be thrilled, the rings are solid, with a nice smooth glide and good resistance to provide a controlled feel. The color balance trackballs are similarly refined, with smooth travel, and while they’re the same size as the balls found on the Wave (to keep the overall footprint small), they manipulate well. This is again due to a complete redesign of all components inside and out.

Having seen the development of these panels from the initial foam-core mockups through the first prototype panel, I can say that Tangent has put an enormous amount of thought into the Element panels, with numerous tweaks to rotary encoder and button spacing, knob shape, control arrangement, etc., to try and create the best experience. Ultimately, it’s impossible to know how comfortable they’ll be until they’re plugged into a system, but, in my hands-on with the prototype and various components, the fit and finish of the individual controls and the panels as a whole is top notch, especially at the prices they’re considering.

At the time of this writing I have no idea which software companies will be supporting these new panels, but I’m hoping the usual suspects will step up to the plate. Alongside the panels, Tangent is designing a new software control system that will make it possible to integrate nearly every panel that Tangent makes together under one SDK (including the Tangent iPad software). In theory, companies that are able to support the new Tangent control protocol would be able to support every panel Tangent makes. However, this will require reprogramming on their part.

Furthermore, the modular design of the Element means that it may be possible to purchase individual button or knob panels to add to the Element’s base set, if this is supported by a particular software application. This information is preliminary, so it’ll be interesting to see what is ultimately supported.

Bottom line, if you’re in the market for a compact control surface at an affordable price, you should wait to see the Element when it’s unveiled at IBC (it won’t ship until later). While it won’t replace the sheer scale and joy of a grading application’s custom-made, native control surface (for example Baselight’s Blackboard, DaVinci Resolve’s Control Surface, or the Quantel Neo), these large-scale control surfaces do cost 10-20 times more. The Element may be just the thing for a smaller shop on a tighter budget looking for a thoroughly professional set of controls, or for second room or on-set use where compact size and portability are important.

Keep in mind that this is not a review, as I’ve only seen prototypes on the workbench, not shipping units. As always, wait until you’re able to get your hands on one of these before making any kind of decision. Control surface preference is an intensely personal thing; everyone has their own reasons for liking one over another. That said, I think the Element will fill a need that’s not yet been addressed, at a price and level of quality that will be surprising.

[…] It looks like Tangent Devices is working on a new control surface. […]

[…] I posted an article a few weeks ago with information about the new Tangent Element color correction control surface to be unveiled at IBC. Well, IBC is upon us (almost), and Tangent Designs has posted some photos of the new surface. […]