Given how much I’ve written about color over the years, from time to time I’m asked in casual conversation for my opinion on the photoshopping of models on magazine covers. This is an interesting topic as it has significant overlap with the process of color correction for cinema and video. It’s easy to find examples of the abuse of Photoshop, shaving pixels off of arms and thighs, blurring complexion until the face is a plastic mask, etcetera. And these examples may lead one to think that the digital manipulation of the people is an inappropriate or even morally questionable step, given how it skews the representation of models, creates unrealistic body-image norms, and generally gives readers and viewers an entirely wrong idea about how people look. The following two grades (using a clip that accompanies my Color Correction Handbook) show what I’m talking about. 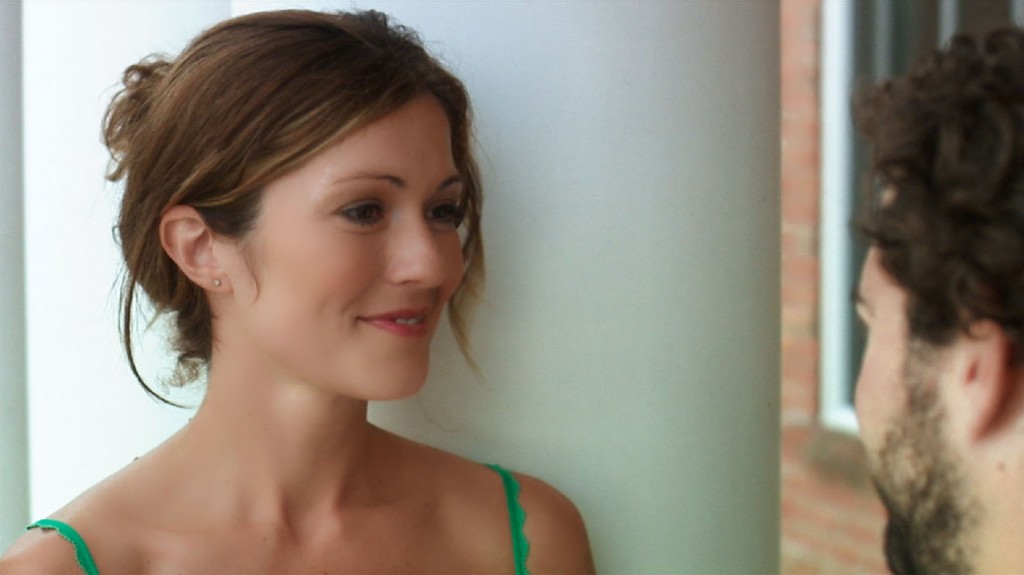 In this version, the woman’s skin tone is altered using every trick in the book, changing her tone and smoothing her into a caricature of complexion 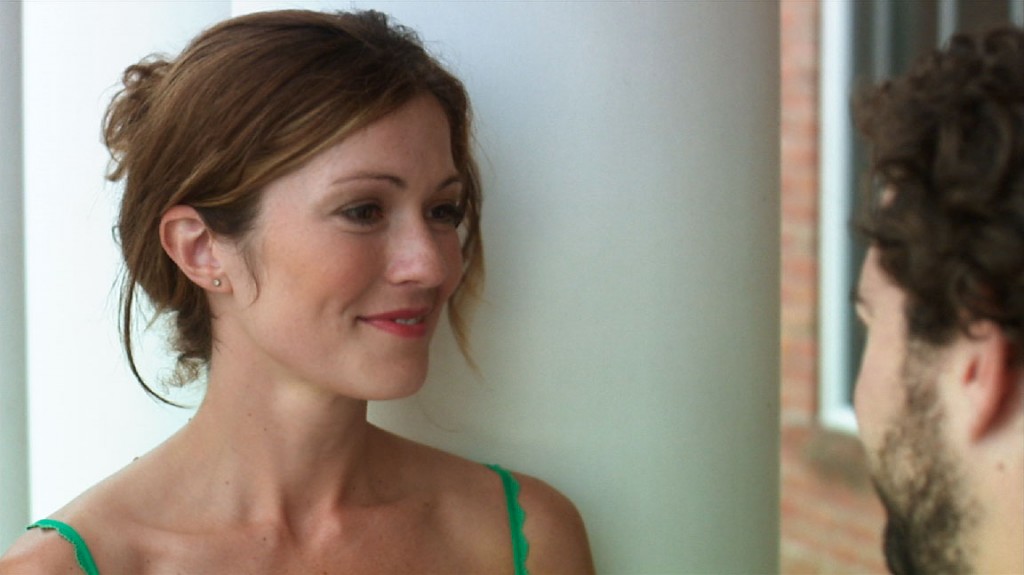 The same shot with a much lighter grade; still altering the hue and applying far slighter softening to subdue her freckles, but leaving the original character of the performer intact

This is a worthy topic of discussion, because I believe all those things to be true. However, in an increasingly raw-shooting world of media production, it’s also true that just about every image coming out of a digital camera needs to be adjusted to look its best. There are few cameras that put out a perfectly usable image right off of the memory card, and even in those cases it takes a talented DP to produce nice images. Even so, raw or log-encoded images typically require some decision-making in terms of how you want to produce a human-viewable image, and in cinema and broadcast, those decisions are going to be subjectively made by colorists, who are hired because they have (supposedly) the good taste to make the image look great, and the good sense to not do anything stupid.

And so, knowing on the one hand that all digital images given to me will benefit from some adjustment, and on the other hand realizing that overcorrection will encourage bad habits in an industry that is all-too-often guilty of encouraging unrealistic ideals, I’ve developed a simple rule that I try to adhere to when grading performers in a project.

Don’t make any correction to the color, contrast, or texture of someone’s complexion that couldn’t have been done by a makeup artist doing a naturalistic job.

This is the main rule I live by in the grading suite, and that’s the rationale I use with clients who want to push me to do more. Usually this explanation suffices. Sometimes it doesn’t and the client who’s paying my bills pushes me to go farther anyway, but I’m lucky in that being the exception rather then the rule.

That said, there are some adjustments that I do feel more comfortable making more aggressively. Pimples are obviously temporary, and no actor alive would keep me from removing such a blemish if they’re unlucky enough to have one appear during a shoot, which is easily done using a small window, some tracking, and a bit of blur (or using digital paint if you’ve got a tool that lets you clone one small area’s pixels onto another region).

In another example, actors who tend to freckle can sometimes end up looking craggy in grades where you’re deliberately upping the contrast for dramatic effect. In these instances, reducing the intensity of the freckles in the skin tone of the grade using a bit of blur, noise reduction, or other techniques (such as pulling Resolve’s Midtone Detail parameter to a negative value) actually brings those actors closer to how they ordinarily look in life.

Likewise with bags under the eyes due to exhaustingly long hours; I typically don’t annihilate them, but they’re easy enough to minimize using a couple of windows, some motion tracking, and a combination of slight contrast adjustments and very slight blur. I did this very thing for my short, “The Place Where You Live,” in one of the opening shots. It was a long day’s shoot, and the makeup artist wasn’t aware just how close in we’d be pushing into her face since we were squeezing a couple of shots into the schedule in a hurry. 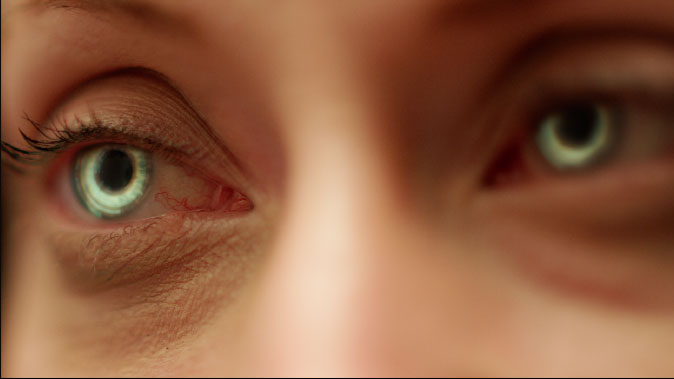 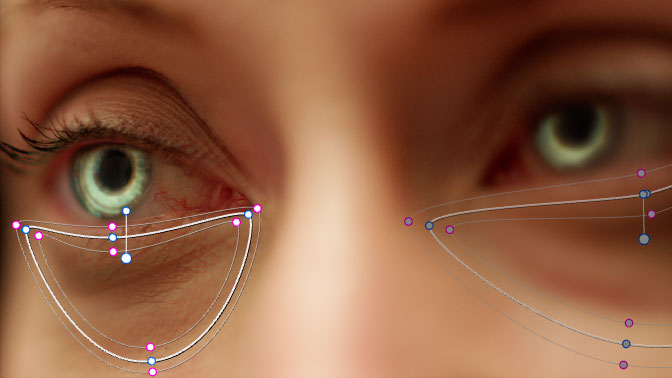 Isolating the region under her eyes to subdue, but not eliminate, signs of fatigue

A slightly tougher call is on reality TV shows where you’ve got people on-camera with blotchy complexions. It’s one thing to adhere to the realistic portrayal of people, but consider that you probably have someone who wasn’t expecting to be on camera, who may not have the best (or any) hair and makeup provided to them that day, who are now being scrutinized in a closeup by an unforgiving lens and an even less forgiving camera format. Blotchy complexions (typically uneven patches of slightly redder hues in the blush areas of the face) are easily minimized using Hue vs. Hue curves to push the blotchy areas closer to the hue of the rest of the face, or by qualifying the face, desaturating it slightly, and then using the color balance control to push the subject’s skin towards the ordinary hue of their face. In these cases, it’s never a good idea to eliminate the blotchy complexion, that will look unnatural. Instead, you want to minimize the problem complexion such that it’s still there, but its importance is reduced within the framing of the image.

And that, to me, is the important thing for both colorists and directors to keep in mind; the best correction in my view is one that minimizes, rather then eliminates, perceived issues with a performer’s on-screen complexion. Barring some dramatic requirement (a sick or tired character, horror movies), you want performers to look as they normally would on their best, most well-rested and relaxed day. Even (especially) if the requirement is for an idealized grade, you don’t want them to look like a blurry-skinned sparkle-zombie.

At the end of the day, I think it’s important to integrate a more realistic portrayal of people, that doesn’t give the audience unrealistic expectations of what folks look like, with the need to do quality grading that puts the performer or subject’s best face forward. A clear image of a performer or interview subject combines careful lighting, hair and makeup, and sensible choices of lens and shooting format. Should any one of those be deficient, the Colorist should be prepared to step in and make a compensating adjustment, but that adjustment should ideally go no farther then was would have been realistic on the set.

[…] author and trainer, Alexis Van Hurkman shares some wise thoughts on the ethical aspect of this colour correction process over on his personal blog that are well worth a read. The question of whether the kind of […]