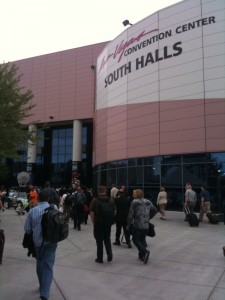 Another year's pilgrimage to NAB, in Vegas...

Well this year’s NAB is shaping up to be a doozy. Having spent the day chatting with representatives from various vendors of color correction software, color critical broadcast monitors, and accelerated storage systems, all of which I take a professional interest in, I thought I’d share some end of day thoughts.

Of course, the biggest news is Blackmagic/Davinci’s announcement of a $995 Mac OS X compatible, software-only license of their flagship color correction application, Resolve. Spending $30K gets you the overwhelmingly designed control surfaces (USB connected, by the way), while $50K gets you the control surface and a Linux license (and then you need to buy the appropriate CPU/multi-GPU configuration to run it). 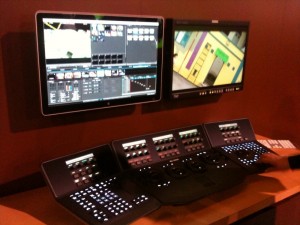 Interestingly, on Mac OS X, you’ll end up installing two NVidia GPUs into your Mac Pro, one in the default slot that’s used to run the UI, and a second one to do the image processing. Coupled with an additional Blackmagic card for video I/O (they say they’ll introduce compatibility with other video I/O interfaces eventually), and another I/O card for whatever flavor of accelerated storage you’ll be wanting to use, you’ll have one full Mac Pro workstation. From what I saw on the showroom floor, you can do quite a bit with this configuration.

While they were at it, Davinci has refined the user interface of the new version to make it a cleaner, sharper, darker experience. Overall, it appears to be a powerful and efficiently designed product. Davinci has long been one of the top names in color correction systems, and having the Resolve software available on OS X is a big deal, never mind the exceptionally affordable price point. I look forward to having this tool in my suite.

Of course, there’s plenty of other news. Iridas is showing an update of their color correction software Speedgrade (for which there’s also an OS X version), which expands upon an already impressive array of native format compatibility.  Speedgrade has a lean, efficient interface with a useful and unique take on some common operations, and a really interesting field-to-post suite LUT-based workflow that’s very cinematographer-friendly. I’d like to get to know this product better.

I also checked out Discreet’s Autodesk’s color grading software, Lustre. From a distance, I’ve always been a bit put off by Lustre’s dense user interface, but watching the demo artist in action, and especially seeing some of the new shot sorting and grade management features they’ve put into the application for their new release, I was impressed. They’ve also put quite some thought into the stereo grading workflow, which I’m seeing is fraught with all kinds of pitfalls for colorists (left and right cameras not matching and with a lens flare in one eye but not the other, jeez!). Sure would be nice if they took a page from their Smoke playbook and brought Lustre to the Mac, but that’s just me thinking aloud.

At colleague and friend Robbie Carman’s suggestion, I also went to see the Flanders Scientific monitors. Having heard about these for years, this was my first view of them. Although the show floor is the worst possible place to evaluate a monitor, what with all the ambient glare killing the contrast, I was impressed at the gamut handling, the wide viewing angle, the visibility of full-range image data (super-white and super-chroma), and the properly presented interlace handling (there’s still plenty of 1080i programming being produced, it’s not all progressive frame yet). Coupled with true 10-bit processing and display, HD-SDI and 3G, and full-blown 3D LUT calibration, this is a righteously proper broadcast monitor for a mere $10K.

On the other hand, I finally had a look (after two years of wanting to see one) at HP’s Dreamcolor monitor. Again, it’s hard to judge fairly in the environment, but I liked what I saw, and at a mere $2K, it’s a nice solution for the right suite, and certainly priced to move. Not, however, necessarily a good solution if you’re needing to work with interlaced material for broadcast (the Dreamcolor engine can’t deinterlace and calibrate, so you need to feed the monitor a deinterlaced signal). Again, if all you do is progressive, then this is not a problem–it depends on the work you do.

I saw lots of other things (my Twitter feed has many more ramblings, if you’re into that sort of thing), but I’ll end with my one extravagant, yet unobtainable wish–the Konica Minolta CS-2000. 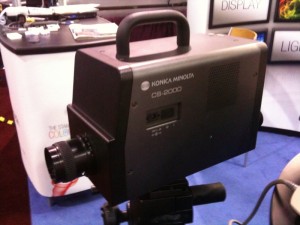 It’s a spectroradiometer of extreme accuracy and low-light sensitivity. In my color correction writings I often like to spin off onto tangents of comparative research, and I wish I had a tool like this to go crazy with measuring real-world color phenomena.

And this was only the first day. Much more to see tomorrow, I hope to connect with Filmlight and Assimilate to see what they’re up to in their new releases. Oh, and I’ll be interviewed briefly on Larry Jordan’s Digital Production Buzz at 4:05. Whew! 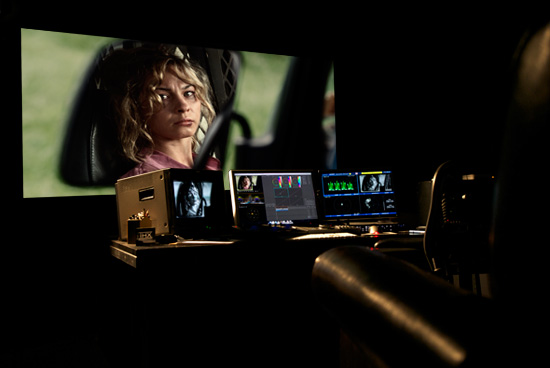 I’m a week overdue in mentioning this, but after a month of preparation and two weeks of backbreaking work, I’ve moved my color correction suite to co-locate with Twitch Post, with whom I’m partnering to offer my color correction services to an even more diverse clientele.

For those of you who’ve already been working with me, nothing has changed. You can still reach me through correctionforcolor.com and contact me directly for inquiries and scheduling, and I offer the same range of color correction and compositing services as before. However, being located at Twitch means that additional editorial and finishing services are also available under the same roof, should you need them!

My new, larger suite offers many advantages, not the least of which is a huge 114″ front-projection screen (nearly 10′ diagonal), for an immersive grading theater experience suitable for any project. My HD-native projector is THX-calibrated, and the entire room has been constructed to conform to established digital cinema evaluation standards. Narrative and documentary features, shorts, and promos can be color corrected with complete confidence that what’s on the screen is what the audience will see.

And not only have I moved, but I’ve already completed the first project in the new space—color correction for artist John Pilson’s nine screen video installation “Frolic and Detour”—playing at the New York Museum of Modern Art.

Visit www.correctionforcolor.com for direct information about my color correction services, and to contact me for quotes and scheduling information.